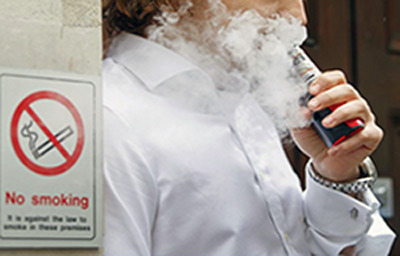 Have you ever had one of those moments that you know you’re right, but a friend or coworker argues with you? It’s a pretty amazing feeling when they come back later and admit you were right. Well, the vaping community recently had this sort of experience, so join us in taking a minute to bask in the feeling! A recent scientific study concluded that vaping is better for one’s health than smoking tobacco cigarettes. For those of you who already made the switch, feel free to roll your eyes with us, because, yes, we knew that already. Of course, despite the study just proving things we already know, this is big news for vaping! In case you missed it, be sure to go back and check out our last post, where we dug into the underlying reasons for why this is big news.

In this article from last October, Newsweek gives a summary of information about a  new study on vaping, the conclusion of which finally confirms what vapers have known for ages: vaping is better for your health than smoking cigarettes. If you’re interested, you can read the full article on the study of vaping in the Journal of the American Heart Association online here, but the important point is that the study was conducted like any other legitimate study. The parameters for this particular study include:

- The participants in the study were all former smokers but non-vapers in good overall health to create a good baseline for gauging any changes that might occur.

- Participants all vaped with the same vape device models, using a tobacco-flavored e-juice followed by strawberry flavored e-juice (both with and without nicotine at different points in the study).

- All participants were instructed to vape for the same duration with both devices and e-juice flavors, then heart rate and blood tests were done following each session, and noted whether the participants were given an e-juice with or without nicotine.

Ultimately, the study concluded that...  YEP!   You guessed it That former smokers who switched to vaping generally live longer. WOW Imagine that!  So in reality we all assumed this was the case, but scientifically speaking this is a huge deal.

If you haven't already, Make The Switch to Vaping

The reason vaping is different from so many other smoking-cessation methods is that it offers a comparative replacement to the sensations of smoking without the damaging smoke. In addition, the e-juices used for vaping can be customized to a preferred level of nicotine to help users wean down to a lower level or ditch the nicotine entirely over time. If you’re ready to make the switch, visit Central Vapors online for all the e-juice flavors and vape supplies you could need. And, if you need help, our team is available via phone, email, and online chat to give you advice, so make the switch to vaping today!


To keep things unbiased heere AND because its your health were talking about, here are the details of how this study was conducted and considerations to keep in mind.

Of course, one small study does not make for a comprehensive and all-encompassing verdict on the e-cig versus tobacco cigarette debate. The study mentioned above had a relatively small pool of participants and it only went for a comparatively short duration. A broader statement on the effects of vaping needs something we just haven’t had enough of yet: time. However, this study can be seen as a microcosm of the lifelong effects. The results of the study imply that switching to e-cigarettes is likely to leave fewer people disabled from things like lung damage. In addition, switching to vaping means fewer health-damaging toxins in the body than a tobacco cigarette smoker would be exposed to. So, while it’s not a decade-long comprehensive study of the effects, this study does represent the sort of positive changes people can expect to see by switching from cigarettes to vaping.