4 Things You Didn't Know About Vaping 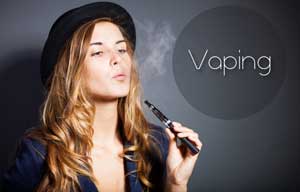 Vaping and a few things you might not already know

"e-juices" are the liquids used in e-cigarettes which contain nicotine, glycol, glycerin some great tasting flavor concentrates and usually nicotine if preferred -- Just type into Google the word "ejuices" and you get millions of results. Online retailers sell these products by the bucket load, and there are hundreds of flavors to choose from. 2.75 million Americans now use e-cigarettes, and e-juices are crucial components of all vaping devices. Here are four things that you need to know about them.

You might think e-juices are a recent phenomenon, but these products date back to the '60s. Back then, 56 percent of American smokers had more than 20 cigarettes a day, and people were looking for alternatives to costly tobacco.

Herbert A. Gilbert patented the first e-cigarette product, which he marketed as a smokeless non-tobacco cigarette. "There is no electric cigarette today, that I have seen, that does not follow the basic road map set forth in my original patent," said Gilbert in an interview. "If you remove any part shown in my original patent from their electric cigarette, it will not function. It may be positioned differently, sized differently, controlled differently, but, it still follows the road map set forth in my patent drawings."

Gilbert's product didn't catch on, and it would be another 40 years before e-cigarettes and e-juices became a commercial success. In 2003, Chinese pharmacist Hon Lik came up with the idea of a new vaping device, and the first modern e-cigarette went into production just a year later. Today, e-liquid sales are booming. As a matter of fact, e-juices generated $1.35 billion in sales in 2015 alone.

2. Tobacco is the Most Popular E-Liquid Flavor Worldwide

Traditional tobacco, blueberry peach, chocolate orange -- there are hundreds of e-liquid flavors on the market. Some flavors, however, are more popular than others. Here in the United States, tobacco remains one of the most popular types of e-liquids. This flavor imitates the taste of conventional cigarettes.

International tastes mirror domestic ones. In a recent study of e-cigarette users in France, Germany, Italy, Poland, Russia, South Korea and the United Kingdom, tobacco was the most popular e-liquid flavor by a considerable amount. In fact, nearly one-third of all participants in the research vaped with this flavor. In Poland, botanical was the second-most popular e-liquid flavor, while fruit was the second-most popular in the United Kingdom. Other popular blends favored by participants in the study included caramel and honey.

3. E-Liquids are Cheaper Than Cigarettes

E-liquids work out cheaper than cigarettes in the long run. Although vaping requires an initial outlay at the beginning -- you will need to purchase a starter kit, which contains your vaping device and battery -- you could soon recover your investment. The average smoker -- someone who smokes 12 cigarettes a day -- will start making savings after 51 days of vaping, says the New Republic.

E-liquids vary in price depending on the manufacturer and flavor. However, one study suggests that you could save over $100 in comparison to conventional cigarettes if you used 10 ml of premium e-liquid per day. Low cost is one of the reasons why people use electronic nicotine delivery systems, according to a study of Twitter users.

If you want to save even more money on e-liquids, look for online sales discounts and coupon codes. This is a great way to save cash, and you could make a considerable saving on your favorite e-juice blends.

Most of the e-juices on the market contain one of two diluents -- substances which dilute other ingredients. These diluents reduce the mixture of flavors in an e-liquid to create the perfect blend and transport the e-juice flavor to the user. Propylene glycol (PG) and vegetable glycerin (VG) are two of the most popular diluents. PG is a clear, odorless liquid that is used as a base in several pharmaceutical products. People who use e-juices with PG say this diluent provides them with a strong throat hit. VG, on the other hand, is a thick liquid with a sweet taste. People who use e-liquids with VG say this diluent produces more smoke vapor.

When choosing an e-liquid product of your own, you will be able to choose the PG/VG ratio you prefer. "High VG fluid tends to give a much smoother feeling on the throat, with a more substantial 'thicker' mouthfeel," says journalist Ian Jones. "The flavor is slightly muted in VG fluids, but this can be countered by using more power to produce more vapor. Be careful to stay within the voltage and wattage limits of your atomizer, or you risk dry hits, or even damaging your equipment."

Just last month, the Food and Drug Administration delayed the implementation of a controversial new set of regulations that could impact the vaping industry. While manufacturers and public officials battle over whether the government should re-categorize e-cigarettes as tobacco products, sales of e-liquids continue to soar.

Looking for a wide range of different e-juice flavors? Central Vapors has premium blends and tasty vape juice liquids that provide you with great value-for-money. Click here to find out more!