How to get the Biggest Vape Clouds 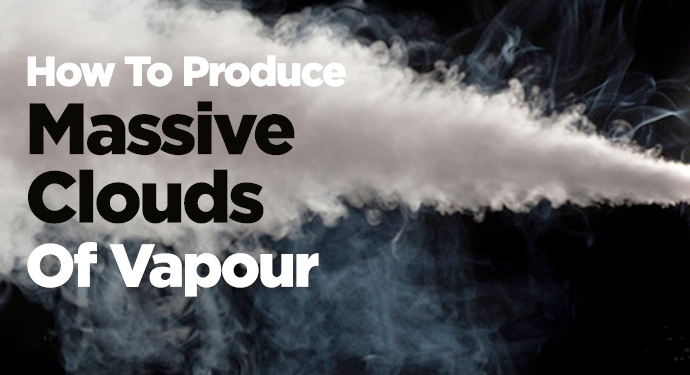 When you first start vaping, your first thought probably isn’t about the size of the vapor clouds that you produce with each exhale. However, over time, this is often something that begins to move to the forefront of most vapers’ thoughts. If you’ve been a vaper for some time, it’s likely that you’re wondering whether it’s possible to produce even larger vape clouds than those that you’re already producing. You’re sure to have noticed some people blowing huge clouds, seemingly without a second thought or any effort, and if yours are puny and small, it can be quite frustrating to try to replicate their success. Fortunately, it’s possible for everyone to produce big clouds of vapor. The answer lies in two thing – technique and greater vapor production. If you’re ready to learn more, read on and discover our top tips.

If you can increase your vapor production, your vape clouds will naturally be bigger. One way to do this is to boost your device’s power. This allows you to vaporize your e-juice more rapidly. If you vape using a low resistance coil with a powerful battery, your vapor production will increase exponentially. This is known as sub-ohm vaping, which has become a popular trend.

Sub-ohm vaping involves using a coil with a resistance under 1 Ohm. If you reduce the coil’s resistance, more power can pass through the circuit. As a result, e-liquids can be vaporized at a considerably faster rate. Bear in mind that it isn’t the power increase that creates more vapor. Rather, it enables you to receive the vapor more rapidly than if you were vaporizing the e-juice with less power. As the e-liquid is vaporized more quickly, more vapor can be taken in from each inhale.

One of the most important elements in vaping is airflow, especially when you want to produce more vapor. When you increase your vape’s power by using low resistance coils or higher wattages, the temperature of the vapor increases. This means it can be too hot for comfortable vaping. If you increase the airflow, though, more air can enter the device and this will cool down the vapor’s temperature so you can inhale it more comfortably. This also increases the size of your vapor clouds. When you increase your atomizer’s airflow, more air can move over the coils. When the amount of air passes over the coil increases, the device produces vapor more quickly. As the vapor production increases, the vapor is pushed more rapidly out of your device and is also replaced more quickly with fresh vapor.

The type of e-liquid you’re using has an effect on your vapor cloud size. E-liquid is composed of two components – PG and VG. As these components have different functions, the majority of e-juices are a mix of the two. PG supplies throat hit and flavor, while VG supplies the vapor. This means that if you want to increase the amount of vapor produced and create larger clouds, you’ll need to choose an e-liquid with a high VG content. There are e-liquids on the market that contain a VG ratio of 100% and these produce thick, large clouds. However, they don’t always taste great, so you’ll need to determine whether huge clouds are worth sacrificing flavor for. It’s probably best to find a good balance between the two. There are plenty of e-juices on the market today that have a high VG content but with a small amount of PG added to boost the flavor and improve the throat hit. Most sub-ohm vapers find that a blend of 80:20 VG:PG or 70:30 VG:PG work well for them, giving them both the throat hit and taste that they crave along with the huge clouds of vapor that they desire.

Another option is to forgo the store-bought e-liquid options and  make your own e-juice instead. This will allow you to choose the perfect ratio of VG to PG that’s right for you. It also gives you the opportunity to experiment with flavors and tastes that suit your preferences.

Producing bigger vape clouds isn’t just about which device you use. It’s possible to own the same device as an impressive cloud chaser but still produce smaller clouds. This is because technique also comes into play. The best technique to produce large clouds involves finding the right balance of exhaling, inhaling and posture.