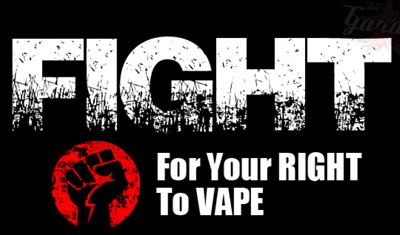 How many of you out there remember Joe Camel? What about the Marlboro Man? These iconic characters used to be everywhere—on billboards, in magazines, and on TV advertising worldwide—then seemingly disappeared overnight. This happened because legislators decided that cartoon-y Joe Camel and other cigarette advertising ploys were marketing to kids in an aim to start the next generation of smokers. This led to legislation changing how cigarette companies could advertise their products, and ultimately has led to further legislation about where smokers can light up (hint: basically no public areas).

This push to phase out cigarette use ultimately helped vaping and e-cigarette use rise to the fore. E-cigarettes offer a healthier alternative, and vaping has helped countless smokers ditch the cigarettes for good when no other means helped. But now, legislators are trying to stick their hands into vaping regulations—even more than they already have. Last month, a politician in New York submitted a proposal that seeks to control e-juice sales and distribution in New York. If this proposal is passed, it could have some serious repercussions for the vaping community as a whole.

According to the New York Daily News, Assemblywoman Linda Rosenthal (D-Manhattan) introduced a bill last month designed to not just control but “ban the sale and distribution of e-cigarette liquids in New York.” That’s right, Rosenthal and her supporters don’t just want stronger regulations about e-juice, they want to ban the sale of them entirely in New York. Rosenthal’s proposed bill follows on the heels of a recently signed law that bans smoking of e-cigarettes in schools, both public and private. On top of the new bill and the recently-passed law, New York’s Clean Indoor Air Act was extended to include e-cigarettes, which bans use of them in most public spaces, including restaurants, bars, and workplaces.

Rosenthal’s bill was introduced because, in her own words, “I don’t know many adults who would like to inhale bubble gum or strawberry vapor.” Obviously she isn’t deeply connected to the vape community. The important detail here is this: Rosenthal’s bill is using the kids as the reason to put such strict measures in place. The logic behind this latest proposed bill is that e-juice flavors only appeal to kids, not adults. If you follow that logic, banning flavored e-juices will help stop minors from vaping.

What This Means For Vaping

When it comes to talking about the safety of future generations, it’s pretty easy to understand where Rosenthal is coming from. Nicotine is a substance widely known to be addictive, and a big part of the reason tobacco cigarettes aren’t great for your health is because the addictive nature of nicotine means many smokers have a hard time quitting, if they can at all. Rosenthal’s bill is aimed at keeping the younger generation from getting addicted to nicotine before they’re old enough really comprehend the lifelong implications of that potential addiction. This is why cigarettes and vaping are both restricted to those older than 18. However, treating vaping just like we do cigarettes is a big disservice to e-cigarettes. After all, e-cigs were developed as a healthier alternative to tobacco cigarettes.

At Central Vapors, we are pretty big proponents of vaping rights. As with any new legislation, it’s up to those people it affects to speak out. Whether you agree or disagree with Rosenthal’s proposal, the best things you can do are register to vote, get educated on the topic, and contact your representatives to make your voice heard. If you’re interested in supporting vaping rights, contact the Central Vapors team to learn other ways you can get involved